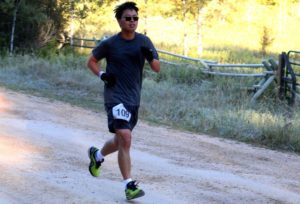 A: I grew up in a small town in the southwest of China. My parents were farmers, and I was the first one going to the college in my family. After earning my master’s degree from China University of Geosciences in Beijing in 2017, my wife and I went to Spain and I got my PhD there in 2011. Then, we came to the University of Texas in Austin as postdoctoral fellows. We then moved to Rapid City. I started as an assistant professor in the Department of Geology and Geological Engineering at the South Dakota School of Mines in 2015. We have two kids (Sophia and Max).

A: When I was a postdoctoral fellow at the UT-Austin, I was occasionally running usually for less than 30 mins. I formally started running in June 2021, just about 1.5 years ago. I used to play badminton with my colleagues and students at School of Mines. However, sometime the challenge is to find players for the specific time. I heard my other two Chinese friends in the town who are great runners and ran marathons for a couple of years. I asked myself why not to have a try at running, which is time flexible, and the weather is also great in the summer. The last couple of years I had put on some weight and my physical examination gave me some bad numbers. Running would be a great workout to get the shape back. It does work. All the numbers were good for the last two years since I started running. 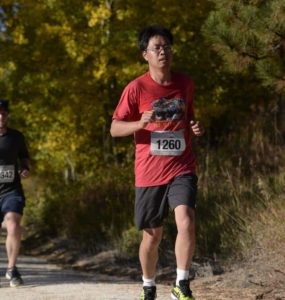 A:  I started running roads, and I did not know there was trail runs at that time.  I like the speed of road runs. However, I was astonished by the beauty of Black Hills trails. I would have never seen these trails if I did not run. In fact, it gave me another reason why I love the Black Hills. 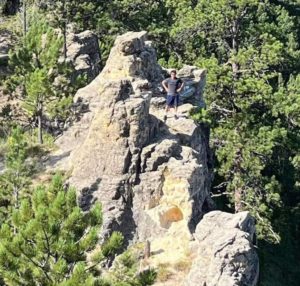 A:  My favorite distance is half marathon. It is a distance where I not only had a good feeling of the pain for my legs but also got enough workout. Since I started running, I often run half marathon weekly which I could never think about it before. Also, when I traveled to a new place, I always find a time and the best routes/trails for running a half marathon. I have only ran one Marathon so far, the Sundance to Spearfish. My time was 3:39, and I think I’ll run it again in the near future.

A:    Definitely, running with a group such as the Tuesday and Thursday group runs of the club will help me stay motivated. I also found that following running friends through Strava will help me be motivated to run, in particular, for the winter.

A:  Play with my kids, and watch movies. Or ski at Terry Peak, a new hobby.

A:   There are many things that could benefit from running. Surely, running will make me more confident because I’m in better shape. Also, running is a great reliever of stress in the work and home. I also met a lot of different people after joining the Black Hill Running Club.

A: It might be my first marathon running from Cement Ridge to Spearfish Canyon. I thought that running is just run, and you should train for the endurance and speed. However, when I ran it, it is not only the running, but also a process of your mental examination. I could barely go to sleep the night before the race, get up at 4am and drive to start point of the race. I cannot believe that so many people still can run, without sleep. Yes, they can, or they have a better sleep. Also, the race itself was an experience I would never forget. When I reached to the first half, I had a time of 1:37, and I have never run that fast. I thought I would be close to qualify Boston if I could keep the same pace. However, the truth is I got 2:02 for the second half. I could not catch up the pace, particularly for the last 6 miles. Probably this happens for many runners. How to run a marathon is science.

A: Be consistent for the training, and do not lose hope. I ran weekly half-marathon for a couple of months, and it works fine. However, when I started increasing my mileages to 15 or 18 miles, I always felt knee pain and after some homework from internet I knew it was IT Band Syndrome. I was questioning myself if I still can run marathons in the future. But after some stretch exercises for some time, I felt good when I had a long-distance run, without IT band problem again. Taking a step back and building your strength of muscles will help you achieve higher goals.

A: My running goal is to keep running. If there is any chance, I could run Boston, or Chicago marathon, I would be very pleased.

A:  Black Hills Runner Club inspires me most during the running journey so far. After I joined the club, I met so many runners: no matter they are trail runners or road runners, older or younger runners, ultrarunners or marathon runners. They tried to achieve their own goals through running. I also met so many volunteers spending tons of hours to support the running community, which I have never experienced in the past. I also appreciate the Black Hills Runner Club’s openness and inclusions, which let me be part of running community. Without it, I am not sure that I could keep running and finish my first marathon.

A: Be consistent and find your own goals though running. Running is hard only if you think it is hard.

Happy New Year!! Hope that all your running dreams come true in 2023. 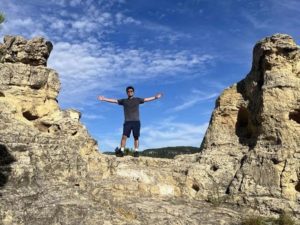