A: Here’s the short story of my life. I lived in Rapid City until, I think, I was about 3 years old. Then moved to Sioux Falls and graduated from high school there (Lincoln class of ‘85). My Dad’s side of the family is from Sturgis and I would always spend a good part of the summer there with my grandparents while growing up. If you were ever at Boulder Canyon Country Club during the summer from the mid-seventies to early eighties we’ve probably crossed paths, because my grandparents worked there and they’d bring me and my brother, Jeff, along to help out. I decided to go to SD Mines for college because I loved the Black Hills. After graduating, my only job offer was in Peoria, Illinois with Caterpillar. Soon after moving there I met my beautiful bride, Jacquie, and — since she grew up in Peoria and wanted to stay close to her family — I stayed for 30 years. Unfortunately, she passed away due to colon cancer on August 8th, 2019. By that time our youngest of three children, Chris, was moving away for college, so I found myself alone again in a state that I never really wanted to live in. Due to the pandemic and the efforts of my sympathetic boss, Caterpillar allowed me to work remotely from anywhere in the U.S. so I moved back to the Black Hills, which I’ve always missed, just before Christmas of 2020. My mom and brother also live in Rapid City, so that’s an added bonus.

A: I got into running in 2005 when I was 38. I recall thinking that if I don’t start running soon I might get too old to start. I signed up for my first race the next year and was shocked to find myself finishing near the front. I remember thinking, “Wow! I might have a talent for this. Too bad I started so late in life!”

A: Back when I was married with three children I would always run alone because I relished the quiet time away from work and family. Conversely, now that I live alone and work from home I almost always run with a group because I relish the socialization.

A: Definitely trails. I love that it gets me out into close contact with the natural beauty of the Black Hills almost every weekend.

A: Probably a 5k. It’s painful, but it doesn’t last too long. I’m not a fast sprinter so I need a race that’s about this long just to get past the people that start out faster than I can run.

A: The BHRC keeps me motivated. The friendships I’ve made in the club keep me wanting to join in on the group runs. The only way I can stay motivated to run alone is by having a goal race and a running coach, which I have at the moment with Kyle Kranz who is awesome!

A:    …probably play more tennis in the summer and ski more in the winter.

A: The relationships I’ve formed with other runners — I often feel like I run just for the beer afterwards. Another benefit is the psychological boost from being outside and from the exercise it provides. It’s been good grief therapy for me.

A:  All of the running that I’ve been blessed to be able to do with my son, Chris. I got him started when he was about 10 years old and he went on to have a great high school cross-country career (MVP his senior year) and is now running the trails around Missoula while attending the University of Montana.

Q: Do you have a pre-race ritual?

A: I pretty much treat races like any other run. Although I do try to avoid drinking too much alcohol (i.e., more than one drink) the night before. For half marathon and shorter races I always do a very slow 15 minute warm up followed by some strides just before the race.

A:  I think it’s helped to reinforce that applying good habits with consistency leads to success.

A:  I don’t have a long term goal other than to just keep running. Instead I try to come up with a new goal every year. My goal this year is to run the Black Hills 50k, which would be the longest race I’ve ever run. I’m afraid this might be too far for me but there’s only one way to find out. I don’t have a time goal; I just want to be able to run at the finish.

A: My wife, Jacquie. I’ve never seen anyone run a tougher race than she did in her 9 year battle against cancer. And she did it with such joy — never a complaint. She was also a model of humility — always putting others’ needs before her own. I know that she’s a saint in heaven now.

A:  Just that you can do it. I think anyone that can walk should be able to run. Start by just jogging 30 seconds every five minutes during a walk, for example. Just keep building and improving. Stay consistent. You’ll reap the psychological and health benefits and be thankful you stuck with it. 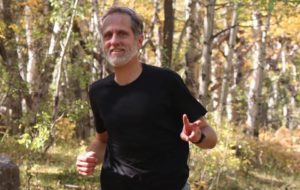